As I’m trying to manage my time and projects and whatnot, it’s kind of dawning on me that I have a LOT of stuff going on right now. My list, let me show you it–not necessarily in any particular order:

–edit three books for self-publication
–after editing, format them all for printing and ebook formats
–learn to format self-pubbed books for printing and ebook formats
–write the Renegade X sequel
–finish/keep up with all my crochet commissions
–keep up with two grad school classes
–do enough tasks to keep my online job because I like having a safety net
–wait for agent notes on my proposal book, then do edits so it can go on sub

Whew! It’s a lot to do, but I kind of love it. Okay, I definitely love it, but there are times when it’s a bit overwhelming how much stuff I’ve given myself to do.

And yesterday was absolutely crazy. I woke up to over 500 feedback messages on DeviantArt. The day before had been free Premium Membership day, so I thought maybe there’d been some kind of malfunction when it switched my account back to the free version. But I pretty quickly realized that wasn’t the case and that something was driving a bazillion new people to my account, specifically to this picture: 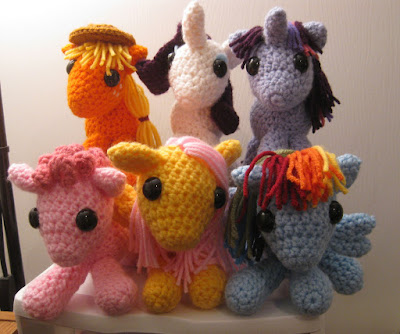 These are the main characters from My Little Pony: Friendship is Magic (which is an awesome show–go watch it if you haven’t seen it). It turned out it had been picked as a Daily Deviation. I didn’t know what that meant, but I started to piece it together when I saw my picture show up on the bottom of site, along with other artwork that was being featured. So, for those not in the know, basically DeviantArt selects images to feature each day. And they picked mine. O__o I was shocked they picked me, once I realized what it was, and it’s still kind of sinking in.

So it’s been a little while since I posted. Real Life sort of kidnapped me and locked me up in a cage dangling above an oversized cauldron and I only just now escaped. *phew* It’s been a busy sprummer, and I think it’s only going to continue to get busier until fall. (In the NW, we have winter, sprinter, mud, a short spring, and a long sprummer, followed up by a few days of real summer, and then fall.)

But anyway, here’s what’s been going on with me. I started grad school, which at first was underwhelming and now is totally overwhelming and I have to go to Syracuse for a one week residency in only a little over TWO WEEKS and I have to get all the work done for two classes first and agghhh!!

Ahem. Grad school has made this a pretty crazy sprummer, especially since it took over a month for financial aid to go through, due to me taking different amounts of credits during different sessions. (I’ve never had financial aid in time to buy books and stuff before the beginning of school, but this takes the cake and eats it too.) And then I have the two classes I’ll be attending during my residency, but I have to get all the work and reading done for them ahead of time. Plus keep up with my regular class that spans the whole semester. Hopefully in the fall things will calm down a bit, especially since I’ll only be taking two (hopefully evenly spaced) classes.

In more exciting news–I know it’s going to be hard to top the excitement of jury duty, but I have to try–my film option with Disney was almost up, and they decided to renew!!! Huge W00T!! I know very little about this project, but I do know that the writers are making good progress and that Disney liked their revisions to the script.

The paperback version of The Rise of Renegade X is out on August 23rd, if my current info is correct. I don’t remember if I posted about it here or not, but it was supposed to be out in May, BUT the sales reps liked the blurb on the cover from the awesome Julie Kagawa and wanted more time to pitch it to bookstores and stuff. (Or whatever sales reps do.) It will be much cheaper than the hardback, but just as cool! And I’m planning to have a contest to go with it, where I’ll be giving away a behind-the-scenes annotated copy of the hardback.

I also have a new book going out on sub soon that I think you guys are going to love.

And that’s all for now because my five page paper isn’t going to write itself… by Friday.

So, I’m working on a big overhaul of the site that hopefully I’ll be able to share with everyone soon-ish. If everything goes according to plan, I’m going to be getting rid of WordPress and exclusively using the LJ (but you won’t have to go to a separate site to view it). I’m also developing a plan for blogging regularly, possibly with TOPICS.

My big news at the moment is that I got into grad school at Syracuse University, for their library and information science distance learning program! I’m still waiting to hear from the University of Washington and Rutgers, but, hey, I got in, and all three schools sound amazing. If I get into all of them, it will be hard to choose (unless one of them comes with major funding, and then it’ll be a lot easier). I wasn’t expecting to hear back yet, so it came as a big surprise. Each school starts in a different month, ranging from July to September, so I’m not even sure when I’ll be doing what, but at least now I have an idea of what I’ll be doing next year.

The Rise of Renegade X comes out in paperback in only a little over three months, which I’m getting pretty excited about. I mean, yeah, I know the book’s already out, but now it will be out again (and only $8.99) and sitting on shelves next to other paperbacks. I’ve got some ideas for some new RRX swag and maybe some contests in the near future, so stay tuned for that.

School Library Journal mentioned my book today in their Interesting Reader Society – Book Reviews by Young Adults. It was my first brush with a pro journal, and it went a little something like this (actually, it went word for word like this, because I’m copying it directly):

Damien Locke lives in a world where your DNA structure decides whether you become a hero or a villain. On each inhabitant’s 16th birthday, the hero/villain’s thumb fingerprints change to an H or a V. But when Damien’s thumbprint becomes an X, everything changes.

This story was fast, exciting, and fresh. I thought the cover was good, and it showed an important scene when Damien is being forced to jump off a building. The confusion of Damien throughout the book is so real.—Madison C., age 13

Cross-posted from the Tenners LJ:

Okay, so for the past couple weeks I’ve been talking about Sekrit Good News I couldn’t share, but now the wait is over. I tweeted the basics, but here’s the detailed version of the story.

A couple weeks ago, before the holiday break, my phone rang. I almost didn’t answer it, because it was noon and I maybe, uh, keep weird hours and wasn’t really awake. If it had been anything but a 212 number, I wouldn’t have answered.

It was my agent. She told me she had good news for me. I was thinking it couldn’t be anything big. Then she said so-and-so had called and I immediately interrupted because I didn’t recognize the name and was like, “WHOZAT??” She said the film agent. THE FILM AGENT had called her with good news for me, so then I was all, “Ohhh… Go on.”

Apparently this had been going on for a while already, but she very wisely didn’t want to bring me into it until it was real. She told me Disney was going to make me an offer to option the film rights by the end of the day. I told her if I dropped the phone, it was because my hands were shaking. O__o

Then she told me they had writers attached, and she told me who they were, and that part I believe is still secret, but let me tell you I SQUEEEEEED. (Actually, here might have been where I told her if I dropped the phone, it was because my hands were shaking. It was true, but to my credit I did not drop the phone.) I will tell you I was recently rewatching a TV show they’re involved in and thinking to myself how much I’d been influenced by the earlier seasons and how much I loved the show and how awesome it was. How BIZARRE is it that possibly at the same time I was thinking those things, they were liking my book? The universe was on crazy sauce, I tell you.

The deal is with Disney Original Movies, the same people who made High School Musical and Camp Rock. So right now if they make it, they’re intending for it to be a made for TV movie ON FREAKING DISNEY CHANNEL. (Have I mentioned that my parents only watch Disney Channel? I mean, like, before this deal happened. I don’t think my dad has slept in weeks, he is so excited.)

Now I can’t stop thinking how cool it would be if the movie made from my novel launched the career of the next Zac Efron or something.

At first the reality of all this hit me like a ton of bricks and I was super STRESSED out. Like, totally freaked. You’d think only really awful bad news would have that affect, but IT TURNS OUT that crazy good news, almost-too-cool-to-be-real-but-is-real-anyway can do that to you, too. Now you know. I’ve had a couple weeks to calm down (and get back to work on the new WIP–writers know what I mean when I say it’s annoying to not get anything done on the WIP, even if you can’t work because you have something good going on (or at least I hope other people feel that way, so I don’t sound like a Scrooge)), so now I’ve calmed down and it just feels very surreal, more like it’s happening in a story than like it’s happening TO ME.

But OMG. The news will be appearing in Publisher’s Lunch, and I will of course keep everyone updated as I get new secrets and the go aheads to spill them.