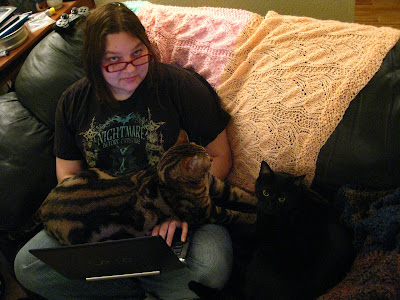 I was watching my two cats fight yesterday. Teisel, the big one that looks like an ocelot, refuses to attack unless he’s *perfectly* calculated exactly how he’s going to do it. When he’s going to pounce, where he’s going to bite, and, most importantly, whether or not he thinks he’ll be successful. He only wants to attack if he’s going to win. But he loses every fight.

Kitten (the black one in the pic–you can see his eyes–who isn’t actually a kitten anymore, but the name totally stuck), on the other hand, has a completely different fighting style. He’s quick and bold. He makes lots of frequent attacks, even if a good percentage of them never make contact. He tackles and lunges and snaps his jaws at Teisel, not bothering to calculate whether he’ll actually hit him or not. Like I said, a lot of them don’t actually find their mark. You could say his attacks fail a lot, though it’s obvious he doesn’t see it that way. And yet, he kicks Teisel’s ass every time.

I think you can see where I’m going with this, because it applies not just to cat fights, but to writing. When writing a book, a lot of writers subscribe to Teisel’s methods. They don’t want to fail or be embarrassed or have anything go wrong so badly that they meticulously plan, and calculate, and make sure their attempt is going to be *perfect,* whether that means taking years to painstakingly craft their first book – because they want their first book to be good enough to get published, so they won’t have any “failures” – or if it means never submitting any books until they think it’s a “sure thing.” But Teisel hardly ever gets any attacks in. And when he does, no matter how perfectly he thinks he’s calculated everything, it’s never a sure thing. Sometimes he makes contact, sure, but never as much as Kitten does, and he always loses. And it’s obvious he always feels embarrassed and angry and like a failure.

Kitten’s method takes more guts. His first attempt might not be successful, and even if it is, it takes more than one attack to win a fight. But he doesn’t waste time worrying about failure–I don’t think Kitten even has a concept of what failure is (though Teisel is very conscious of it). Kitten attacks often, not waiting for the right time or calculating how to win without making any mistakes. In fact, technically he makes lots of mistakes, but never as big of a mistake as Teisel, who’s too cautious to make a move. Kitten wins every fight (seriously, EVERY fight, and they tackle each other pretty often), not just because he’s not afraid to make mistakes or fail, but because he doesn’t even see his mistakes as being mistakes.

They’re just part of the process of kicking ass.

And so, if mistakes are necessary to win, does that really make them mistakes? At the end of a fight, Teisel’s attacks might have made 100% contact, whereas Kitten’s are more like 50%, and yet it’s clear who feels like a loser. I’m not even saying that Kitten feels like a winner, because he doesn’t really care. He just wants to have fun. It’s Teisel, the one who cares so much about failing that he’ll never take a chance, who sets himself up for disappointment