If you’re submitting your novels to agents or editors, or even thinking about submitting, you’ve probably had to deal with query letters. Â And, if you’re anything like I was when I was sending out query letters, the thought of having to write one probably makes you want to tear your hair out and curl up in the corner and die. Â Maybe you’ve got a couple queries under your belt, but you’re not getting requests when you send them out. Â Or your beta readers go over your letter, say it needs “something,” but can’t tell you what that something is. Â Or maybe–and this is my personal favorite–you’ve got a case of too many cooks in the kitchen, telling you all sorts of spices and vegetables that need to go into your query soup, so that what comes out after all your revisions isn’t so much a soup as a puddle of unappetizing goo.

Sound at all familiar?

Don’t worry, it gets easier. Â Writing query letters is a craft, which means you can learn it. Â And you can bet mine used to be embarrassingly bad. Â I was practically the poster child for unreadable query letters, and I dreaded every minute of writing them. Â Tips like “make sure it has the same voice as your novel” or “less is better” weren’t very helpful. Â For the record, you do want voice in your letter to match the voice of your book, but it’s like saying that in order to make soup, you need to put in salt. Â Great! Â Very true! Â But… does that really tell you how to make soup? Â It’s a tip on how to make it taste better, to liven it up, but it doesn’t tell you what you really need to know to create it. Â The same goes for “less is better.” Â It’s true that you don’t want to bog down your query letter with everything that happens in your novel, but what do you put in?

Before we get started, let’s go over what a query letter is. Â You probably already know if you’ve gotten this Â far, but I want us all to be on the same page. Â The short and kind-of-bland version is that it’s a polite business letter in block format that tells an agent (or editor) what they need to know about you and your book to decide if they want to even read your work, let alone take you on as a client. Â There are straight up facts like your word count, genre, and contact info, but the tough part, and the part we’re concerned with here, is the story blurb. Â It’s the description, similar to what you read on the back of a book, that tries to hook potential readers. Â This is where it gets scary and where I used to get tripped up. Â You query letter has to sell your book to someone. Â Someone who sees thousands and thousands of letters just like yours, and what if you leave out the one detail that would have made them hit the request button instead of delete???

Relax. Â First of all, Â if there are thousands and thousands of letters out there that all sound the same, that’s awesome, because yours isn’t going to sound the same as everybody else’s. Â And second, the details aren’t what’s going to sell your story to anyone, so put them out of your mind for now.

So what does sell stories to people? Â The same thing that always sells them: characters and conflicts. 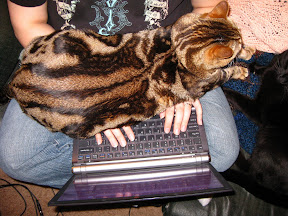 Start your blurb with your main character. Â Tell me what they want. Â Then tell me why they can’t have it. Â  This is important because what a character wantsÂ conveys a ton of behind-the-scenes info about who they are. Â My cat Teisel wants to win fights and feel like he’s better than everyone. Â I could tell you that Teisel is furry and has both stripes and spots, but that’s not what’s important about him, and it doesn’t tell you anything about his personality or why you should care about his struggles. Â And if after telling you he wants to win fights and feel like he’s better than everyone I add that he’s lost every single fight he’s ever started because he’s too worried about winning to actually act, now we don’t just have a character, but the makings of a story. Â It poses the unasked question of “What happens next?”

It’s easy to fall into the trap here of actually telling us what happens next and just listing events. Â For the most part, you want to forget about events. Â And you certainly don’t want your blurb to read like a laundry list of plot points. Â I could say Teisel gets in a big fight. Â He loses the fight. Â He feels even worse about it. Â You might notice how boring those sentences are, even though they’re about a fight, but the real problem with them is that they don’t give us a reason to care about it. Â Again, what makes us care are characters and conflict. Â For example, a conflict-focused version of the previous list of events might start out like this: Â Teisel challenges his worst enemy, Kitten the Undefeated, to one final fight to see who is permanently crowned king of the cat tree. Â Technically, there is an event here–a fight over a cat tree. Â But that’s not what’s important about it. Â What’s important is that Teisel is challenging his worst enemy (and this tells us a lot about him as a character, because even though he’s too afraid to act in a fight, he’s still bold enough to make this sort of challenge), who we see is undefeated (meaning Teisel, who has a 100% losing streak, has no chance of winning), andÂ we see that there are consequences to losing this fight (the loss of the cat tree, which is also a high up place where Teisel can look down on others and feel important; losing both the big fight and his claim to the tree will mean he has no way to achieve his goals).

Pile on your conflicts, showing us the obstacles your character has to face to achieve their goal. Â Give them impossible odds to overcome, and make sure we know what will happen if they fail. Â Piling up the odds is no good if we don’t know the consequences, and the consequences are only as good as how badly they screw things up for our characters.

You don’t need to tell the whole story in the query letter. Â It’s okay to leave out or fudge things that are too complicated to get across in the two or three paragraphs you have for your blurb. Â And it’s okay to leave off the ending. Â My favorite way to end a story blurb is to leave the character with an ultimatum, one that could go either way and that leaves the audience wanting to know which choice they’ll make. Â This is easiest to do by giving them two equally important goals and a reason why they can’t have both.

You can read the story blurbs I’ve written for my books on my site, www.chelseamcampbell.com, under Books. Â The blurb for The Rise of Renegade X is what I used in my actual query letter, and what my publisher ended up putting on Amazon. Â But I also wanted to give an example not based on a real book, to show that it doesn’t really matter what the story’s about, so I leave you with this:

Winning the world figure skating championship is boy’s only chance of winning a college scholarship and getting out of a lifetime of working at his family’s bean farm as soon as he hits eighteen. But when his girlfriend and figure skating partner breaks his heart by selling her skates to buy a guitar and go on a cross country road trip without him, boy scrambles to find someone else in his one horse hometown who can take her place, at least on the ice if not in his heart.

Just when boy thinks he’s found the right girl for the jobâ€”his goth girl neighbor who wouldn’t be caught dead in a frilly skating costume even if she didn’t hate him for pulling an embarrassing prank on her when they were kidsâ€”he sprains his ankle while attempting the super triple skate flip, the one move he’s sure could beat the odds and win him his scholarship. With the competition fast approaching, he’ll have to not only skate while injured, but pull off the most complicated move in the book.

Boy finally wins back goth girl’s trust, confessing that he only pranked her because he had a crush on her, and convinces her to skate with him. Â Romance kindles between them just as his ex-girlfriend whirls back into town with a new pair of skates in hand. She’s ready to take him back and do their old routine together, certain that, with his injured ankle, boy needs her skills now more than ever if he wants to win. Â Boy thought winning the competition and the scholarship was everything, but is it worth it if it means betraying goth girl, the only girl who’s ever stuck by him and might just be his one true love?