This week in my Meaningful Gamification class, we’re studying behaviorism and how rewards are used to affect behavior.  So basically people have studied how doling out rewards/in what ways they’re doled out affects learning.  So if you have someone push a button to get a reward, but they only get a reward at one minute intervals, then they learn not to bother pushing the button until that one minute mark.  But if you make the rewards come at random times, so that the person never knows when pushing the button will get them something, then they learn that behavior really well and it becomes an addictive “checking” habit.

When I was listening to that part of the lecture, my first thought was, “Wow, that sounds annoying.  What a stupid thing to get hooked on.”  And then of course I realized that it sounds EXACTLY like me checking my email.  I think most of us can relate.  And if you’ve ever gotten a really good email–whatever that might be to you–that gives you a really good spike in happy chemicals, then it becomes even harder to quit.  Mostly, though, it doesn’t matter if I ever get the reward of an email or not–checking for it has become an addiction and just the hope of having a message keeps me going.  If I leave for a few days and don’t check my email, then I break that habit a little and I don’t feel the need to check once I get home.  I always feel at that point like I could just walk away from it.  But then I get curious and want to check, just once, just to see… and it’s a slippery slope from there.  (I read once in an entrepreneurial magazine that it’s recommended you check your email no more than four times a day, so it doesn’t become stressful.  I think I’ll start by cutting back to four times an hour.)

And it’s not just me and the other email/Facebook/Twitter addicts out there, by my cat, too.  One of my cats, Kitten, saw a particularly 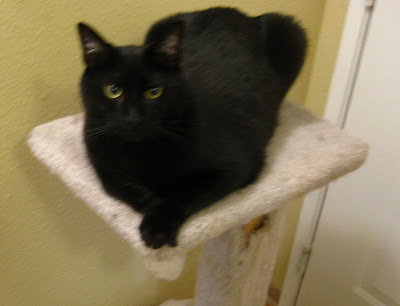 interesting skittery bug in the corner of the bathroom once, maybe twice, and now he’s hooked.  No matter how many times he doesn’t see a bug in the corner, he can’t stop checking for it.  And every time he checks, even if he comes up empty, it seems to reinforce the behavior, making him just want to do it more.  Every time he follows me into the bathroom (he’s also obsessed with following me around everywhere, so maybe he’s prone to addictive behavior–I don’t know), he goes right to that corner and checks it out.  Sometimes he’s in there just staring into the corner, hoping and waiting.  And I often think, “Wow, that is sad!”  And then I wonder if it’s really any sadder than checking the internets over and over.  I mean, I’m pretty sure all my precious emails are a little more important than the possibility of there being a bug in the corner.  But as much as I don’t care about chasing bugs, I’m sure Kitten is equally unimpressed by chasing emails.  If getting to see a bug gives him the same spike of happiness, then is it really any different?