I’ve been getting this question a lot as people finish up The Trials of Renegade X.  Everyone wants to know if there’s going to be another sequel.

And my answer to that is YES, definitely!  I’m still in the planning stages, so I don’t have a title for you yet or a description, but know that it is coming.  I’ve added it to Goodreads and set the release date as September 1st, 2014, and you can add it here.

Okay, so, The Trials of Renegade X wasn’t supposed to come out until the 26th, but it’s actually out right now. The hardback edition I created through Lightning Source appeared on Amazon and Barnes and Noble this weekend.  Oops.  And I think Goodreads has been emailing people that the book is out.  So I’ve been working on getting the other editions up and running.

Which means that you can now get the book.  Like, right now.  Here’s a breakdown:

So there you have it.  I leave you with the excerpt from the back of the hardcover:

I don’t know what happens then, only that I don’t pull the trigger. But a wild tendril of fear flashes through me. Electricity sparks hot in my hand. It feels the same as it did the other night, when the light socket practically exploded. Except this time, I know it’s not coming from some outside source—it’s coming from me. I can feel the charge all the way down to my bones. But it all happens so fast, and before I really get what’s happening, sparks shoot into the gadget I’m holding, and then there are ninja stars flying. Not just at their target—who is apparently a superhero and not a jewel thief—but in every direction.

I have, of course, been dying to show you guys this for a while now, and today is the day! This is the ebook cover for Trials, made by Raul Allen, who was also the amazing artist behind the first cover. The print books will feature the full wraparound, like the first one had, with the city continuing off to the left.

Can a half villain ever be a full hero?

Damien Locke didn’t choose for his supervillain mom to disown him — just because he sort of defied her and ruined her evil plans to take over Golden City — and he didn’t choose for his superpower to be flying, a superhero ability that involves his least favorite thing: heights. But now that he’s living with his dad’s superhero family and enrolling at Heroesworth Academy, he’s ready to embrace his new life, get his H, and finally belong somewhere. But belonging isn’t as easy as signing up for classes, and Damien finds himself struggling to fit in more than ever.

Just when he’s sure his fate as a hero has been decided, though, he gets a new villain power that he can’t control. And things only get worse when he accidentally screws up one of his sidekick Sarah’s gadgets, altering her personality and turning her into a crazed, anti-supervillain vigilante — leaving him no choice but to team up with her annoying superhero boyfriend if he hopes to have any chance of getting the old Sarah back, before she captures — or kills — another supervillain like him.

I think it goes without saying, but I LOVE this cover! I love how bitchy and evil Sarah looks (I know, I know, that’s a weird thing to say, but it’s true).  And I love the city in the background, and the mist on the roof, and the creepy machine there. And of course Damien looks awesome, too! And their belts have Xs and Thetas on them, and it’s just all very cool and amazing.

So many announcements, in fact, that I can make a BULLETED LIST.

And so my bulleted list comes to an end!  This next month is going to be really exciting as I get ready to launch all this, and then of course everyone finally getting to actually read the sequel is pretty mind blowing, too!

I’ve been working on this for a while and am super excited to announce that you can now pre-order The Trials of Renegade X on Kickstarter!  Not only that, but you can get it a whole MONTH before everyone else!

You can also read a sample chapter of the sequel!  And, besides getting to read the book early, everyone who pledges gets their superhero or supervillain name and superpower listed in the thank you section of the book.

There are also some other really exciting incentives, including special limited edition signed copies.  You can also get a minor character named after you, or get a plush of your favorite character!  These last two are very limited–only a few each–so don’t miss out!

Wow, it’s been a while since I posted (guess I was in the writer cave longer than I thought).  I looked at my last post, where I had 19,000 words in the sequel. HA.  Now I have 115,000 and it’s DONE!  That’s right–this book is going to exist.  It’s going to come out this September.  And it’s going to be really freaking awesome (but I think you guys knew that part already).  And if you’re wondering what 115,000 words actually means, I’ll tell you that the first one was 85,000 words, making this a much bigger book.  I would estimate that gives you guys another 100 pages to read.

Of sex and math jokes.

Just kidding.  There aren’t any math jokes in this one.

I had so much fun writing this book.  And drank so much coffee. And, while I miss the characters again already, it feels good to have it done.  I finished the first one nearly six years ago.  Six freaking years.  And there were times since then when I was absolutely certain there would be a sequel, and times when I was absolutely certain there would not.  But you guys kept writing to me, telling me how much you loved Renegade X and asking when there would be another one.  And if it hadn’t been for you guys telling me all that, I don’t know if I would have ever written it.  But you did, and I did, and now I’ve finished the best book I’ve ever written.  And I can’t wait for you guys to get to read it in September!

And since, no matter how much planning I do, books have a way of morphing and getting away from me as I write them (or at least the best ones do), I reworked the book description.  The old one wasn’t inaccurate, but it wasn’t so much the story anymore either.  So here’s the new blurb:

Can a half villain ever be a full hero?

Damien Locke didn’t choose for his supervillain mom to disown him—just because he sort of defied her and ruined her evil plans to take over Golden City—and he didn’t choose for his superpower to be flying, a superhero ability that involves his least favorite thing: heights. But now that he’s living with his dad’s superhero family and enrolling at Heroesworth Academy, he’s ready to embrace his new life, get his H, and finally belong somewhere. But belonging isn’t as easy as signing up for classes, and Damien finds himself struggling to fit in more than ever.

Just when he’s sure his fate as a hero has been decided, though, he gets a new villain power that he can’t control. And things only get worse when he accidentally screws up one of his sidekick Sarah’s gadgets, altering her personality and turning her into a crazed, anti-supervillain vigilante—leaving him no choice but to team up with her annoying superhero boyfriend if he hopes to have any chance of getting the old Sarah back, before she captures—or kills—another supervillain like him.

To celebrate Harper Madigan: Junior High Private Eye’s one year anniversary, the Kindle version is free all weekend–Friday, Saturday, and Sunday–over at Amazon.  And if you don’t have a kindle, you can still download it and convert it to a different file type, if you’re into that kind of thing.

AND my good news about Harper Madigan is that it’s going to be an audiobook!  It should be out sometime in April, and of course I’ll have more details then.  I’ve gotten to listen to the first half of the book and I LOVE it and can’t wait to share it!

That’s all for now–must get back to writing Trials, which, for those of you who missed my tweet. is up to 19,000 words so far.

I updated the title on Goodreads, so I thought I’d do an official announcement here!

THE TRIALS OF RENEGADE X

Did I mention I got to see the rough sketch of the cover a while ago?  I don’t think I did, but it is kick ass.  I’m not going to show it off until it’s done, though believe me I am itching to share the awesome.  Newsletter subscribers will get to see it early, so be sure and sign up if you want a sneak peek before anyone else.

In the mean time, I am writing away and loving spending time with these characters and this world again!  I might try and write up a blurb about the book soon, or I might put it off because blurbs are not my favorite things to write and I just wrote one for the Harper Madigan book–that gets me a blurb free pass for a while, right?  Right?

I’m also going to be putting up a Renegade X sequel FAQ, so be sure to comment or email me (Chelsea@ChelseaMCampbell.com) your sequel questions, and I will do my best to provide answers!

I am proud to present the cover and description blurb for one of my upcoming March releases! The blurb was written by me and the amazing cover art was done by Chloe Tisdale. 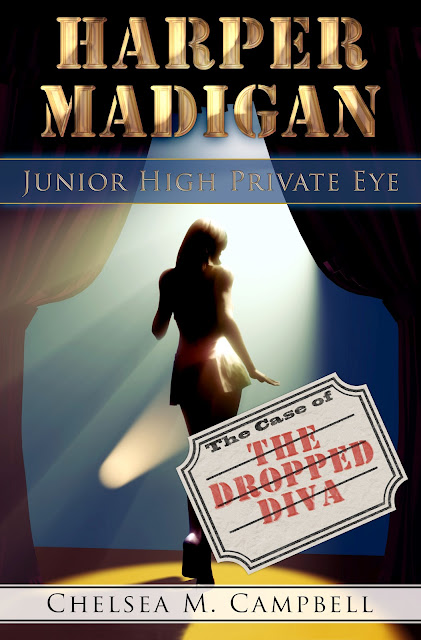 And he especially doesn’t need his troublemaker ex-girlfriend showing up out the blue and asking for his help. She’s accused of attacking the star of the school musical, and with her less-than-sparkling track record, she’s only one suspension away from getting expelled.

Only Harper believes she’s innocent, and now it’s up to him to prove it, even if it means making an enemy of the PTA mafia, risking his agency, and facing the mistakes of his own dark past. But when his new partner insists on doing everything by the book, and his old nemesis–the one bully he can’t catch–starts harassing his clients, it’s going to take more than just detective work to solve the case.

Loud honking announcements that will chase you around the lake and beak you to death for a crust of bread!

Er… probably not.  These are actually very lovely announcements that don’t resemble geese in any way.  But gaggle is a cool word.  It’s right up there with gusset.

Anyway, onto the announcements!

I know, neither of these is the Renegade X sequel.  But it’s coming!  And in the meantime you can tide yourself over with some more great reading. ;)  Each of these will be available in both ebook and paperback.

Blurbs and covers will be up very soon!  If you want to be notified when these books are available for purchase, you can sign up for my newsletter in the top right corner of my site. And if you’re a book blogger interested in reviewing either–or both–of these books, please email me at CampChelsea@gmail.com or through the contact sheet on my site.